I had lost this historical document for a long time, but finally found it the other day on an old backup CD. It’s the original 1997 sketch I made of a chat user interface based on speech balloons. 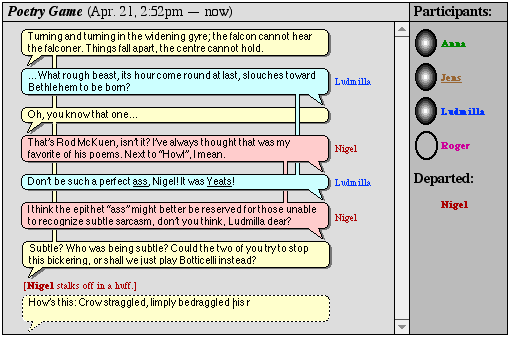 Drawn in ClarisWorks, April 21, 1997. This was based on my experiences with MUDs and IRC, having a really hard time keeping track of many-way chats. I think the only IM app available then was ICQ, which I hadn’t heard of. (IIRC, AIM came out later that year, at least for non-AOL users.) This also predates Microsoft Comic Chat, which used speech balloons too, although in a very different UI: theirs was for novelty, mine was for usability.

Novel features that made it into iChat:

One idea here that wasn’t used in iChat was connecting a speaker’s consecutive speech balloons together with “pipes”. I thought this helped make it easier to identify the flow of the conversation, but it was a pain to implement (I tried doing it in Java once) and I didn’t even try to add it to the NSTextView-based balloons in iChat.

I’m not sure why I put the userpics in the margin but not next to the speech balloons. Maybe I thought there wouldn’t be room, or that it would look weird to see the userpic repeated multiple times.